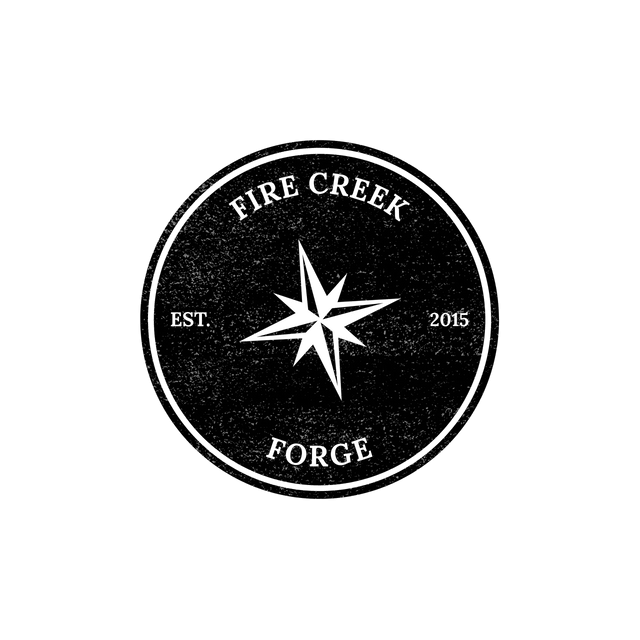 I became interested in  wilderness survival skills at about the age of 12. I began reading books and magazines on the subject, such as American Survival Guide. As I practiced these skills and collected gear, it became apparent that a good knife paired with a solid set of skills was the most basic and reliable foundation for wilderness survival.

As I continued to learn I read books such as Cache Lake Country, Wildwood Wisdom, Tom Brown's books and others. I became enthralled with the concept of how a  good blade, coupled with the proper knowledge, could enable one to walk into a trackless wilderness and not just survive, but live in relative comfort, like the North American natives of yesteryear.

It was this context that preceded my interest in building a good blade. I didn't even have the concept of making my own knife until I stumbled upon the book 'Step By Step Knifemaking' by David Boye when I was about 14 years old. I checked the book out from the library and brought it home.  Within a day or so I was working on my first knife.

The first knife I made was from a piece of steel that was attached to a yard sprinkler. It was the only piece of steel I could find on short notice, so that's what I used.  I shaped the steel with a file, and my grand dad helped me heat treat it (that's when I discovered it was mild steel).  Although I didn't end up using my first knife because it wasn't even hardenable steel, I was immediately hooked. My drive to build a quality, reliable, and beautiful edged tool had begun.

Working with basically no equipment in the beginning, I first tried to heat treat my blades in the wood stove we used to heat the house. This provided, shall we say, mixed results. One knife that turned out ok I sent to a survival instructor I viewed as something of a mentor; Christopher Nyerges. I asked him to give his opinion on the knife, and much to my delight, he sent back a positive report on the little blade. As far as I know he still uses it, and it can be seen amongst the contents of his pack during his appearance on the TV show Doomsday Preppers in 2012, years after I gave it to him.

Initially I built a lot of knives out of reclaimed saw mill blades. One time my dad brought home a long section from the sawmill that lasted a while.  At the age of 17 I attended the Montana State University Horseshoeing school where I learned the farrier trade. The school taught us how to make horse shoes and tools, and hot shoeing, so this proved to be a valuable foundation in blacksmithing for me. My interest in blades didn't wane however, and I may be one of the few students in the schools' history to forge out a short sword during our free forge time.

Over the next decade I pursued various forms of employment, including farrier, carpenter, machinist, and finally law enforcement. I continued to make knives here and there as a hobby. I still enjoyed it, but it was never something I imagined could be a career pursuit. My life as a professional knife maker and blade smith did not begin to take shape until after I met and married my beautiful and talented wife Sarah.

Sarah and I lived our first couple years on a beautiful, secluded piece of forested ground where we rented a single wide trailer. This setting was not only peaceful and enjoyable, it also served to fan the flame of interest I'd had in the outdoors and the primitive wilderness livings skills, and of course, the knife making. I collected the home built grinder and buffer I'd made years earlier, and began making knives again. Making knives and grubbing around in the woods near our house became my way to decompress after coming off a week on patrol. Sarah began to see my passion in these pursuits, and how happy it made me. Sarah became my greatest supporter and encourager in my journey as a blade smith.

Early in our marriage, Sarah and I were working hard to get out of debt, so just buying  a piece of steel to make a knife wasn't easy.  As I began to make a few knives, Sarah saw promise and encouraged me to begin selling them. She opened an online shop on Etsy for me, and our first knife selling venue was born. We also began selling knives and forged goods at the Moscow Farmers Market, which has proven to be a valuable face to face venue for us.  Once we began selling knives, my production numbers combined with the drive to provide customers the best product I could make, served to refine my knife making skills rapidly over the next several years. I began forging blades during this time as well. In 2015 I left my law enforcement career of seven years to make knives full time.

The name Fire Creek Forge was born from several threads through our life thus far. Fire Creek is located in the Selway Bitterroot Wilderness in Idaho, some of the most beautiful country, and one of our favorite spots in the region. Additionally, the combination of fire and water is an apt name for the blacksmith trade. The compass that adorns the blade of each knife speaks to adventure, and direction. The northwest tilt points toward our location on the map.

Fast forward to 2020: We are thankful for the support we've received over the years, and the future looks bright as we continue work to put our knives in front of discerning knife users like yourself.  In 2019 I had the opportunity (after Sarah was finally able to coerce, er, convince me) to compete on the hit TV show Forged In Fire. I was able to bring home the championship title for my episode, which aired April 2019, and the winnings were a great help in building a forging press for my shop. With this equipment I've had the pleasure of adding high quality Damascus steel (pattern welded) knives to my available blades.

Now, we have four small daughters who keep us on our toes. In a few short years, we expect there will be more than one hammer working in the shop. Our oldest, Charlotte, has already begun developing an interest in blade smithing and works on her own little projects, with daddy's help.

In August 2020 we relocated to West Texas, where we enjoy some new opportunities. My dream is to end up somewhere in the Idaho mountains, but we are open to the Lords leading and plan for our life.
Wherever the path takes us, our goal is to remain true to the first inspiration: building a one of a kind, quality knife that you can strap on your belt and use, and feel the confidence of a good blade at your side.